What’s in Your Omega Oil?

What's in Your Omega Oil? 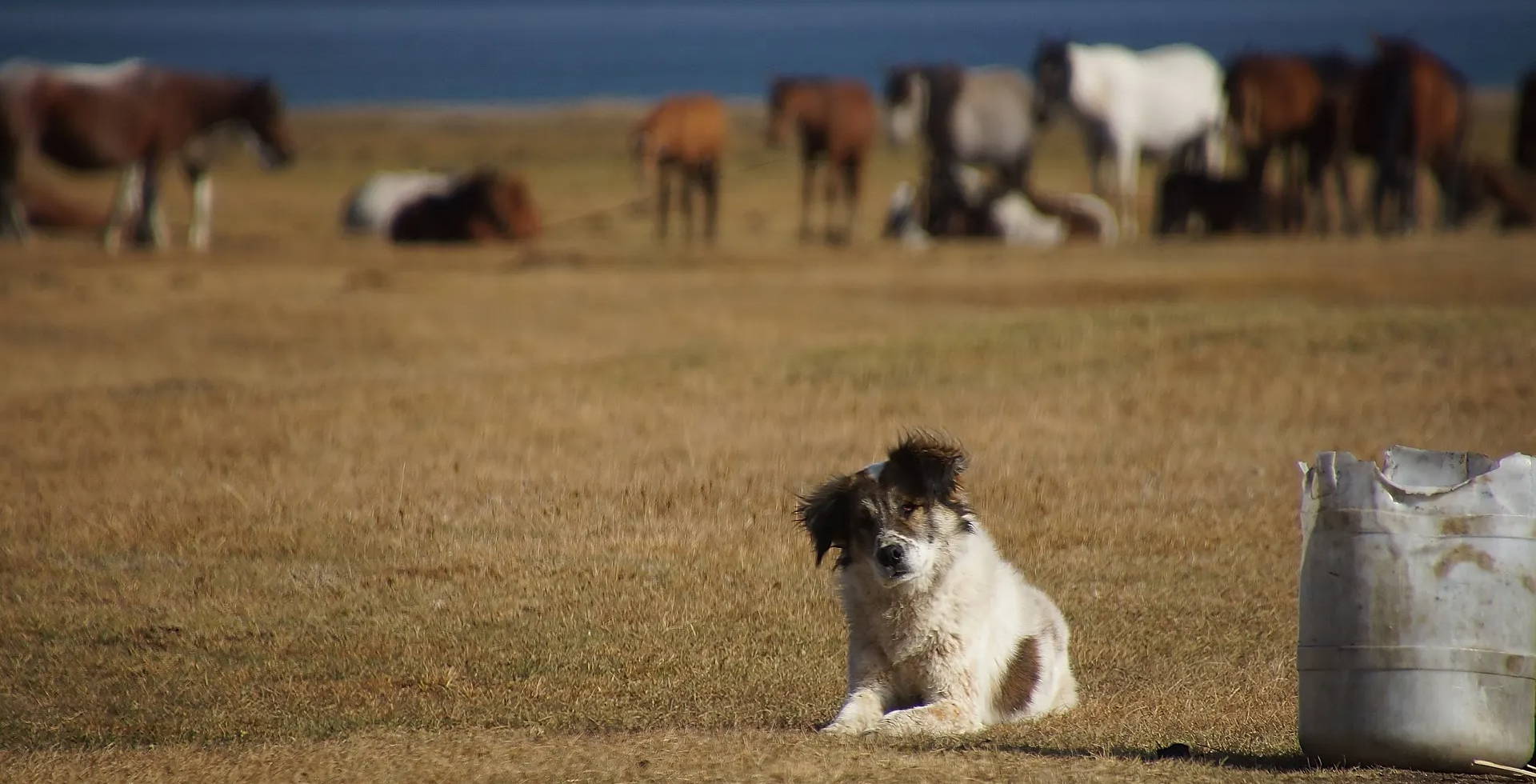 There's a lot of chatter out there so we get it if you are confused about how to choose an omega supplement. Here are some guiding points to help you evaluate a product before you buy.

First and foremost, how much of each of the omega fatty acids are you getting? What is the ratio of omega 3 vs. omega 6? And what type of omega 3 is it? Remember, there are 3 main types – ALA, EPA and DHA. EPA and DHA supplements are sourced from fish or other marine sources. The only one deemed ‘Essential’ for horses is ALA - not surprising since last time we checked horses don’t get much fish in their natural diets! ALA is the omega 3 that is found in their natural diet, so this should be a primary concern when picking an oil. Horses can convert some ALA into DHA and EPA so they will ultimately receive all 3. If you choose to add additional EPA and DHA, remember this is a secondary requirement behind ALA.

All three of these omega 3’s are deemed ‘essential’ for dogs. For additional information on how to properly supplement these 3 essential fatty acids see our previous blog – Why Your Pet Lacks Omegas.

An example of an oil that does not have the ideal balance of Omega 3 is soybean oil, which is not recommended to feed to horses because it is mostly Linoleic Acid – Omega 6. This is a pro-inflammatory ingredient (supports the creation of eicosanoids which cause inflammation in the body). Less omega 6 is better. Soybean also has estrogen like compounds called ‘isofavones’. Soy has been studied and it’s suggested that these compounds are cancer promoters, impairs fertility and messes with thyroid function. Feed this to my horse? Um...no thanks.

Is the company transparent?

It is a quality measure to look at the company behind the product. The product integrity will follow the integrity of the company. Do they give you core information about the product up front like the ratio of omega 3 to omega 6 (we know this is a vital measure when choosing an omega supplement)? How do they behave in the marketplace? Do they engage in negative selling tactics? This is a marketing tactic when confidence in their own product is low. If a product is high quality and provides demonstrative results, that will sell itself, no need to compare to other products.

Does their marketing have you focus on ingredients farther down the ingredient panel (farther down = lesser amounts in the product)? If so…why aren’t they talking about the main ingredients? After all, that is the largest amount in the recipe, and that’s primarily what you are paying for. Distraction marketing is a red flag.

Where are the ingredients from?

Does the company source and support locally, within your country? Or do they buy from the commodity market - meaning from a different buyer (likely different regions) every time they buy the ingredient? Commodity buying is purchasing from whoever is selling at the time they need the product and at the lowest price. If so, it’s not possible to understand the actual growing practices of every seller when they change frequently. There is no way to be sure what testing for purity has been performed by these various ingredient providers. It also eliminates the ability to have a ‘closed loop system’, meaning, being able to trace the oil back to the seeds used for that batch, and then back to the farmer and field those seeds were grown in. This is a fully accountable sourcing system used to maintain the highest quality and safety standards. A company that can control their entire supply chain, from the growing through to the delivery of the product has the ability to have a highly traceable and regulated production process.

Ask yourself, are the ingredients from a sustainable source?

How many ingredients are there?

How is the Oil Processed?

Fish oil processing is a large topic and deserves its own blog, so it will not be discussed here. Other oils are extracted using various processes depending on the manufacturer. Typically, it’s done using either a chemical solvent or oil mill. Then it is often purified, refined, and sometimes chemically altered. Health-conscious consumers prefer oils that are made by crushing or pressing plants or seeds to maintain purity vs. using chemicals. How are chemicals used? For example, one of the most common methods of processing with a chemical is called Hexane Extraction.

Hexane is a volatile solvent that is used to extract oil from soybeans, as well as from olives and nuts. It’s a by-product of gasoline refining that has been designated as a neurotoxin by the CDC and as a hazardous air pollutant by the EPA. When making soy oil or soy isolate, hexane chemical is a cheap and efficient way to extract the oil out of the soybean. Whole soybeans are literally bathed in hexane to separate the oil from the protein.” Unless the product is designated ‘Organic Soy’ then it is likely processed this way as virtually all soy is hexane extracted. So, does this mean that hexane remains in the product? No, it’s not supposed to. The processing has another step which is for the removal of the hexane. The final product is supposed to be free of, or below acceptable limits for traces of hexane as set by the FDA. However, the FDA does not monitor hexane in foods, nor does it require companies to test for it. There have been independent health organizations which tested soy products for hexane and found hexane residues in soy oil, as well as in soy grits and soy meal. This does not mean that your soy product has hexane in it…but buyer beware. The safest option when choosing soy is to buy organic. Hexane chemical is banned in the organic designation criteria (this information also applies to your soy burgers, soy dogs etc.).

Smart Earth to the rescue

Smart Earth produces its 100% Canadian grown non-GMO camelina oil in a cold pressed, food grade facility. We monitor all our production from farm to package. All the natural goodness is retained. No chemicals added. We are proud to say so.

Now…take another look at that label. What’s in your oil? And is it worth saving a few cents per serving? Don’t forget, you get what you pay for. 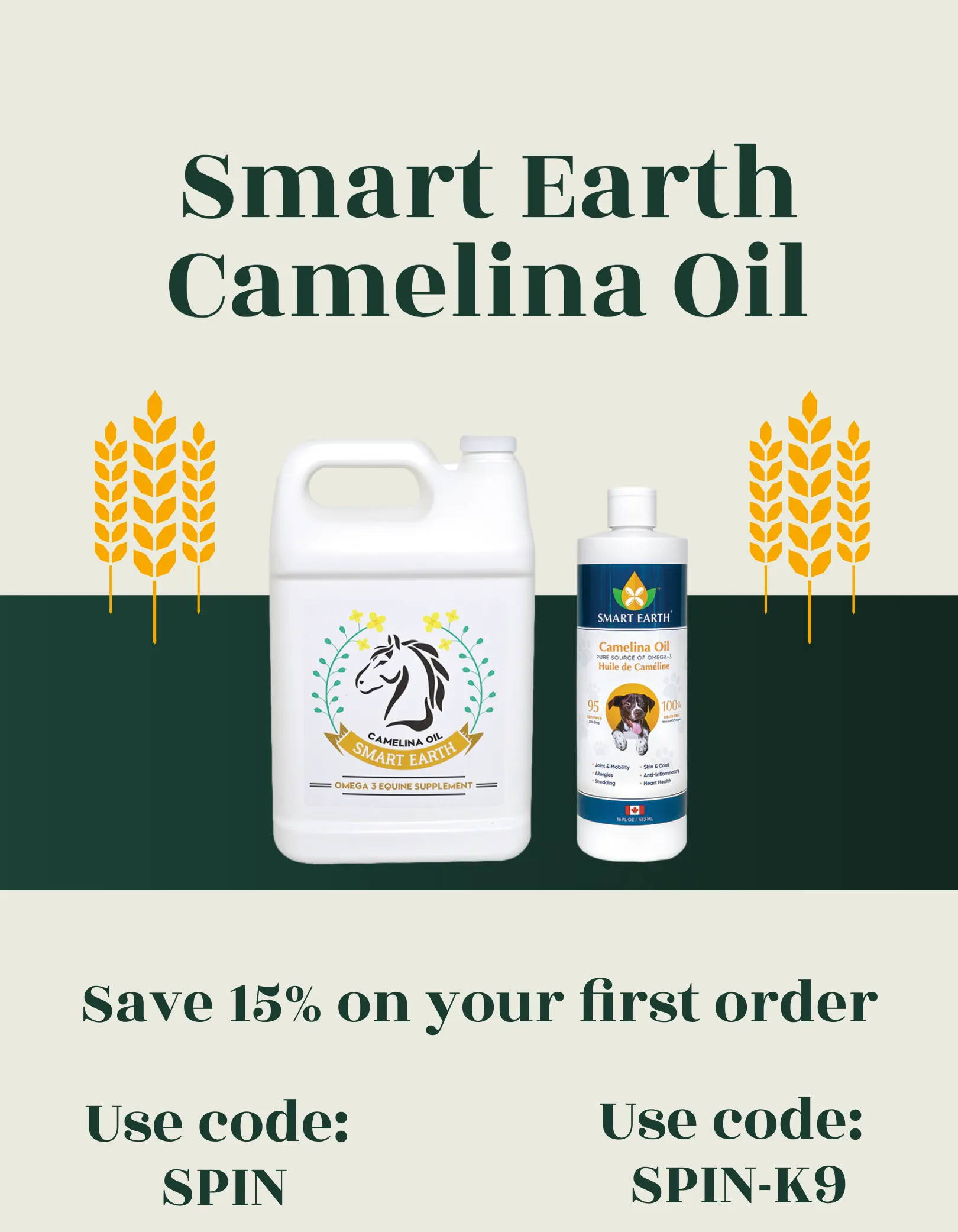 Jenna Tranter is Smart Earth Camelina Corp's equine nutritionist. She is the owner and operator of Four Corners Equestrian and has been involved in the industry for over 20 years. 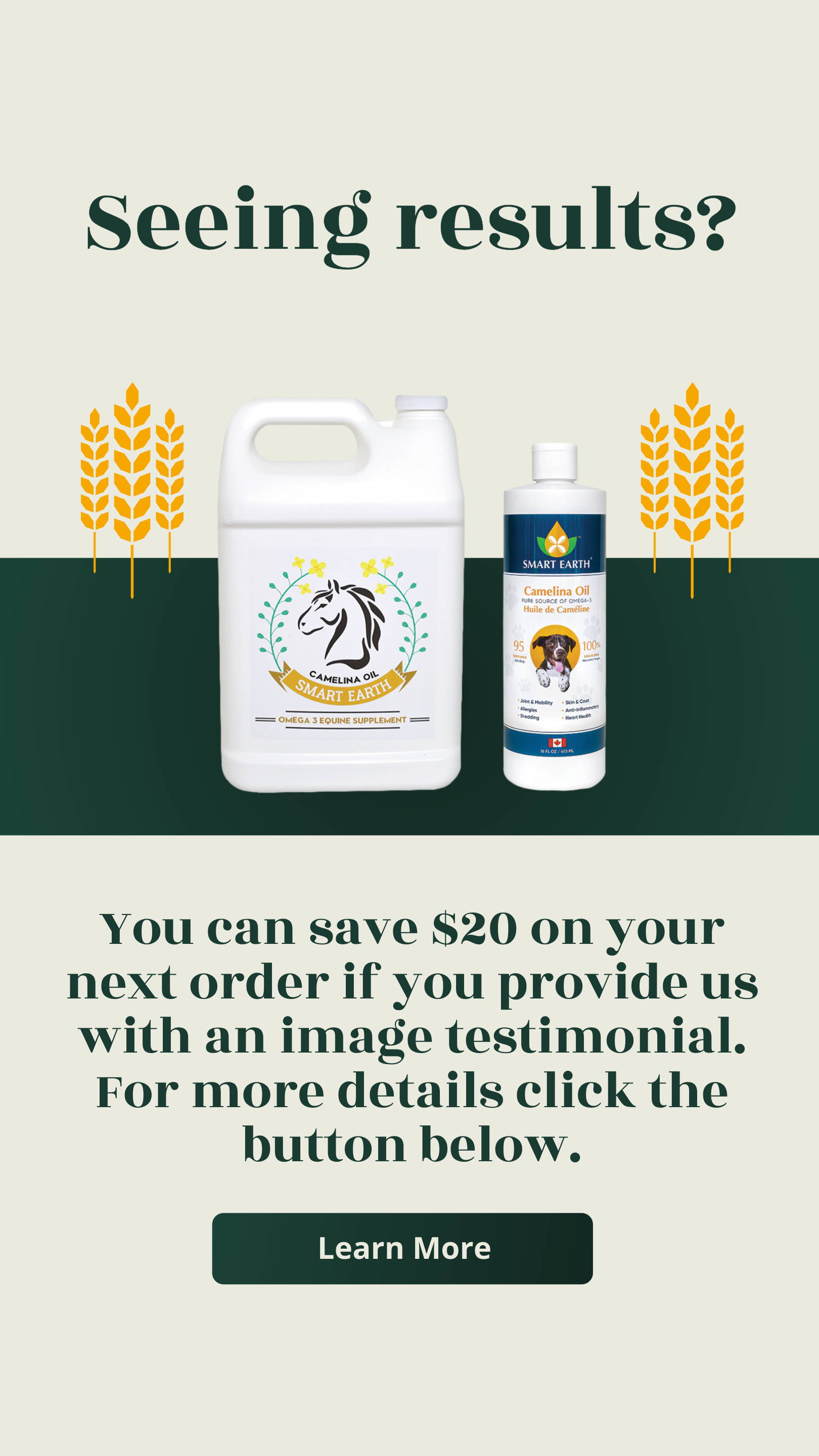 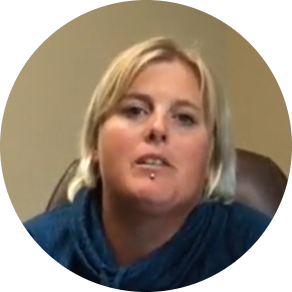 Jenna is a lifelong equestrian and lover of all animals big and small. She has both studied and worked within the industry for 20+ years in both the feed sector as well as being a coach and hunter/jumper facility owner with time spent in the UK and Canada. She holds a number of equine certifications from universities in both countries. She also has completed numerous courses in equine body work, including equi-bow, but is not a practitioner at this time due to there just not being enough time in the day! Jenna lives on her farm in Ontario, Canada with her husband, 19 horses, 2 goats, a flock of ducks, a flock of chickens, her barn cats and her 3 loyal dogs, Bosco, Evaa & Eeyore.

You have successfully subscribed!

Please login and you will add product to your wishlist